Business owners and advertising professionals are constantly trying to stay on top of the latest ways to influence consumers. One question that often comes up is whether or not TV is still an effective tool. According to a new survey conducted by GfK on behalf of TVB, consumers may have the ability to click and buy online but it’s television that drives retail sales.

Television still brings the advantage of reach to the table for businesses looking to influence consumers. Digital plays a great role for retail, but hasn’t yet overcome some of the benefits of TV advertising. In addition to reach, TV simply wields a weighty influence over today’s consumers. Consumers who moved through the purchase funnel were asked which type of media was most influential in making them aware of the product or service they were buying. 45% said TV. This percentage is 5 times the number of buyers who claimed they were most heavily influenced by social media. When consumers were asked what got them to visit a store or website, more than 1/3 said it was television (triple the number who cited social media). When asked what led them to actually purchase, 34% of purchasing consumers credit an ad they experienced on TV while just 9% cited a social media based trigger.

Having said that, digital media is a necessary part of an effective media campaign and some businesses will find their best results in the digital realm. In fact, certain industries are known to have better results for digital advertising (i.e. healthcare, automotive, etc.) What savvy advertisers are well aware of is that television, as a medium, works in tandem with digital to motivate shoppers. This is very evident by another statistic pulled from the GfK/TVB research stating that 87% of shoppers say that TV ads influenced their online searches. Still not sure? Consider some more data supporting the fact that TV ads lead to online clickthroughs through a combination of powerful reach and frequency:

What type of action did they take? Some of them went to a brick-and-mortar store (43%), visited a retailer’s website or app (40%), etc.

The more exposure consumers had to TV ads, the more action they took, according to survey results.

At LJW Advertising, we are huge supporters of your business. We want your advertising to succeed and we want your business to thrive. That’s why we utilize every possible means of advertising and marketing to promote your products and services. Looking for new customers? Need help redefining your brand? Not sure how to maximize on your company’s current success? Let Larry John Wright Advertising help you create the advertising and marketing plan that will put you over the top. 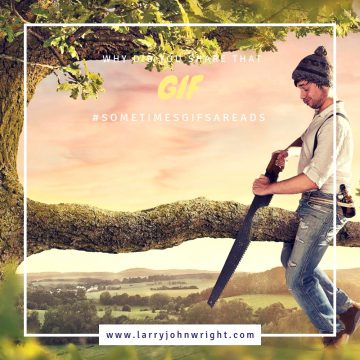 That GIF You Just Shared? It Might Actually Be an Ad

If you’ve ever shared a GIF or simply want to...